Is it best to eat McDonald’s potatoes within “minutes”? A survey result revealed a time limit.

How long is the “lifetime” of McDonald’s potatoes? 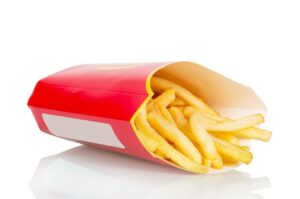 McDonald’s holds down regular menus such as royal road hamburgers and cheeseburgers, and it is best to eat McDonald’s potatoes, which shine as the most popular product, within minutes?

According to Takeout in the United States, the taste of potatoes is more related to texture than temperature, and as a result of conducting a survey at three different stores and time zones, the taste decreased significantly after about 10 minutes. It was said that it went. In other words, the time limit from receiving to finishing eating is 10 minutes. However, it took less than five minutes for the people surveyed to find it most delicious. He also said that potatoes, which had deteriorated more and more after 10 minutes, would “death” between 17 and 18 minutes.

By the way, I think there are some differences depending on the country and store, but usually McDonald’s potatoes are replaced with new ones about every 7 minutes (= potatoes fried 7 minutes ago are discarded). So, it seems that the result will change depending on the timing of delivery in these 7 minutes, but those who want to eat in the most delicious state are within 5 minutes, and those who want to eat in a reasonably delicious state are 10 minutes. It looks good to eat within.

McDonald’s, USA, is conducting a campaign to provide free breakfast to faculty and staff. Last year, 12 million meals were distributed to medical professionals

The reason why authentic French people were shocked by “Japanese bread”

iPhone 14 is made of titanium with punch hole specifications, camera is expected to be 48 mega

Costco, “that product” will “get the money” for the annual membership fee! What items should I buy?

The official view is not “black”! What color is Oreo? This photo may end the discussion