未経験からの外資系への転職する人が知っておくべき、3つのポイント
Billie Eilish laughs about the “real reason” she wore oversized clothes
Bon festival dance is one of the summer traditions in Japan.
Bags that match Hailey and Gigi are under 10,000 yen! JWPEI’s Black Friday sale is hot
I bought 200 yen bananas at Costco and got 30,000 yen in change…
Eminem, Snoop, Dr. Dre and more for the 2022 Super Bowl halftime show
Real estate once owned by Prince Charles, for sale for about 760 million yen
Goosebumps at Costco’s hidden secrets!
BTS’s V dances next to “the female singer” at Harry Styles’ concert
Kanye West declares to be a family again with Kim Kardashian, who is rumored to be dating a new lover
Costco Rotisserie Chicken’s Deliciousness Caused the “Worst Member Story Ever”.
How to make Japanese tea without mistake
McDonald’s notices “cheese problem” about Double Big Mac
Keanu Reeves is the “sexyst man”! Keanu, who made “that person” make such a statement, is too loved
The Matrix Resurrections” is a love story between Neo and Trinity, looking back at their past.
Virgil Abloh’s DMs from before his death continue to be released
Don’t overdo it! What are the behaviors that could get your Costco membership revoked?
Britney Spears Engages Dancer Sam Asgari!
外資系企業転職で得られるメリット 5選
7ポイント、外資系企業の転職面接準備
BTS’s V gets the biggest compliment from Coldplay, saying he’s “another Chris Martin
And Just Like That…” Miranda surprises us on the last day of filming
A popular “harvest garden” in the Netherlands where vaccination is progressing. Enjoy leisurely on the farmland in the suburbs.
Remake of the movie “THE GUILTY” starring Jake Gyllenhaal, unpredictable suspense
Gaston’s public proposal to Belle at Disneyland→Belle’s “reply” is too biting
That popular cast is back! Summary information on the sequel to “Sex and the City”
Adele’s new release coming soon? “30” billboards appear in Tokyo all over the world
The US Football Federation presents the same contract to the men’s and women’s national teams. Will unification of salary systems eliminate gender inequality?
Arsenal’s Pierre-Emerick Aubameyang and Barcelona’s Ousmane Dembele to be traded
“Spirited Away” & “Dragon Ball”, Japanese anime costumes selected by celebrities
Lady Gaga confesses to the back of the raw meat dress over 11 years! What is the claim in the dress?
Best friends Selena Gomez and Cara Delevingne show off their matching “tattoos”!
Manchester United’s Glazer family sells 9.5 million shares with a market value of about 20.7 billion yen … Still only 8% of the holdings
初めて外資系企業の経理・会計職に転職、押さえるべき5ポイント
Brad Pitt’s ‘Surprising Reaction’ to Reports of His Love Life, Revealed by His ‘Rumored Partner
Anya Taylor-Joy, who was selected as the “face of the year”, goes to the award ceremony in the costume of “101 dogs”
ホーム
Habits / Food

We don’t want to do this at supermarkets such as Costco.

That behavior that everyone has been about to do

Costco is a membership warehouse club that has everything from food to daily necessities, clothes to jewelry in a large store. Many people visit every day because of its popularity, but of course it seems to be “irritating” for the clerk who works there.

Anyone posted a photo on Reddit on a US bulletin board with the comment, “If you do this, you shouldn’t put it in any store anymore.”

The photo shows a product that seems to have been taken from another place and left on the detergent! 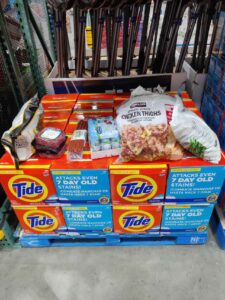 For those who have picked up something at a supermarket, but eventually find it awkward to return what they no longer need to their original location, and want to put it on a nearby shelf. There should be many. Especially at Costco, where stores are large, it is even more unavoidable, but if frozen foods or perishable foods are left at room temperature, they will eventually be discarded as they are.

It’s a waste not only for Costco but also for the earth.

In addition, there are other acts that cause trouble for Costco employees. That is, do not put the cart back in the correct place. Reddit also posted that six carts were left unattended in Costco’s parking lot, just to be seen on the lawn between cars. 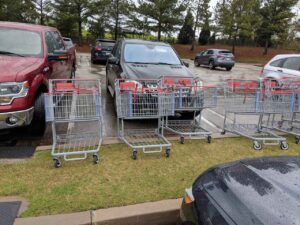 Both of these problems do not put things back in place. Because the store is large, it takes time for employees to notice what is left unattended. I want to respond by a method other than leaving it alone.

Nothing but sympathy for McDonald’s clerk’s “exhausting order”…

Obon and Ohigan, Enshrine the spirits of ancestors in Japan