There are a lot of worries about the contents of the “Notice” posted on the Costco rotisserie chicken section.

Rotisserie chicken may disappear from the store !?

If you become a member, you can get all kinds of products such as food, home appliances, and clothing at reasonable prices, so the most popular membership warehouse club in Japan, Costco’s signature product is roasted whole chicken. Rotisserie chicken. Rotisserie chicken, which is sold at a surprisingly low price of 4.99 dollars in the United States and 699 yen in Japan, is a super, super, super popular product that may be given numbered tickets during the Christmas season, and it is only in the United States every year. It has sold over 600 million units.

The rotisserie chicken is now facing a crisis. The other day, a Costco member wrote on reddit on the US bulletin board that “the supply chain crisis seems to be getting worse,” and at the same time, a photo of the “notice” paper that I saw at the rotisserie chicken department. Post. The announcement said:

“We apologize for the inconvenience, but the rotisserie chicken is out of stock today.” 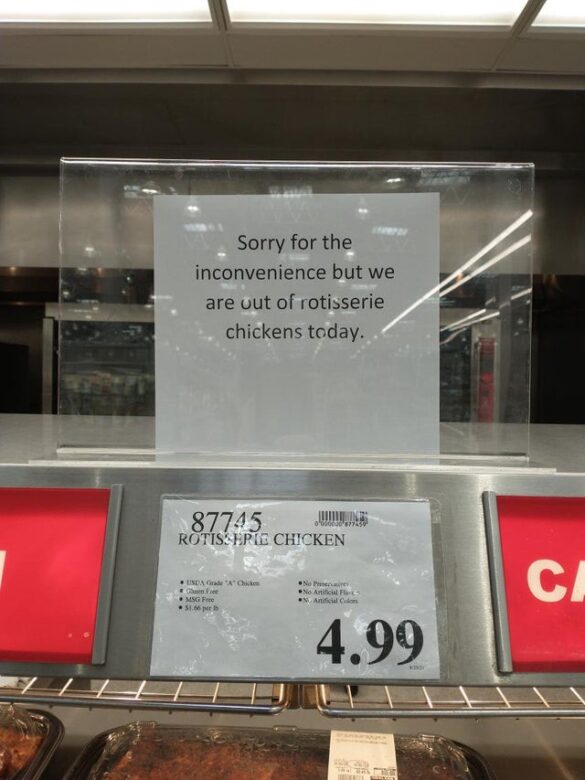 It was May this year that chicken vendors in the United States first announced a serious chicken shortage. And since late October, USA Today has reported that things are getting worse. According to the Wall Street Journal, chicken prices have already begun to skyrocket, and Costco’s rotisserie chicken may run out, at least until the global supply chain crisis is corrected.

Perhaps Costco will keep the low price of $ 4.99 at all costs, but if the price of chicken rises further and can no longer be offered at a low price, it is quite possible that it will continue to be “out of stock” like this time. As a result, many people who have seen the news have raised concerns that Costco’s rotisserie chicken will be the next victim.

Starbucks: What you need to know about refills.

“Onigiri” and “melon bread” are popular in Paris

スポンサーリンク
Watch “Get Back” by The Beatles, daughter Paul McCartney and two sons of John Lennon
Starbucks exposes “secrets” that customers do not want to know to clerk