Billie Eilish talks about how watching adult videos since the age of 11 has affected her “sex life”.
20 years after George Harrison’s death, Paul McCartney releases photos taken by his late wife
U.S. Secretary of State Adds “That Song” from “Blade of Annihilation” to Her Music Playlist
転職した外資系企業で地獄から脱出した、5ポイント
外資系へ未経験で転職する準備には？日系企業との違い 4つのポイント
Best friends Selena Gomez and Cara Delevingne show off their matching “tattoos”!
Billie Eilish Blasts Charlie Puth for Calling him a ‘Loser’
Susan Sarandon & Anna Friel starring in new drama “Monarch”
Kentucky Fried Chicken’s Colonel Sanders, arrested in a shootout, has a “real” past.
Benedict Cumberbatch in the movie The Courier: Top Secret Carrier Spies Avoid Nuclear War
Louis Vuitton and Nike collaborated Air Force 1, unveiled by Givenchy’s designer
Popcorn on the Christmas tree? Kendall Jenner’s “Mysterious Tree”.
McDonald’s “This Way of Eating” Tastes Like Heaven, Try It Now!
Adele’s favorite eyeliner is a huge hit! Also available in Japan
Anne Hathaway looks like Audrey Hepburn!
Costco Rotisserie Chicken’s Deliciousness Caused the “Worst Member Story Ever”.
Christopher Abbott on new film directed by Yorgos Lanthimos and starring Emma Stone
Billie Eilish laughs about the “real reason” she wore oversized clothes
円満退社に向けたあなたが注意すべき事、5項目
Don’t miss the airport version of the popular anime! Very satisfied with goods and gourmet “Narita Anime Deck” latest guide
突然、外資系企業への転職活動中に英語での面接と言われたら、押さえる5ポイント
Gaston’s public proposal to Belle at Disneyland→Belle’s “reply” is too biting
Japan’s “Too Sexy Ronald McDonald,” which shook the world, became a topic of conversation overseas again with a certain “trigger.
How to make Japanese tea without mistake
Ben Affleck reveals he ‘thought twice’ before getting back together with Jennifer Lopez
Hailey Bieber puts in a tattoo full of “local love”
Jennifer Lawrence participates in a “abortion” right-seeking demonstration in Washington, D.C.!
“He’s the one who’s impatient” Adele, Ed Sheeran and don’t mind the release time
Kentucky Fried Chicken, “Left Food” Causes Horror
Kanye West declares to be a family again with Kim Kardashian, who is rumored to be dating a new lover
Jay Z has a rare watch limited to 170 pieces from Tiffany & Co. and Patek Philippe
McDonald’s notices “cheese problem” about Double Big Mac
初めて外資系企業の経理・会計職に転職、押さえるべき5ポイント
Obon and Ohigan, Enshrine the spirits of ancestors in Japan
Don’t overdo it! What are the behaviors that could get your Costco membership revoked?
7ポイント、外資系企業の転職面接準備

McDonald’s, a major hamburger chain, is very popular not only for its hamburgers such as the Cheeseburger and Big Mac, but also for its side dish, French fries.

The fries are so exquisitely fried and salty that some people go to McDonald’s not for the burgers but for the fries. In the past, nutritionists have explained why people can’t stop eating McDonald’s fries, but there are other reasons why McDonald’s is so particular about its fries.

That is, McDonald’s carefully selects four kinds of potatoes for their fries! 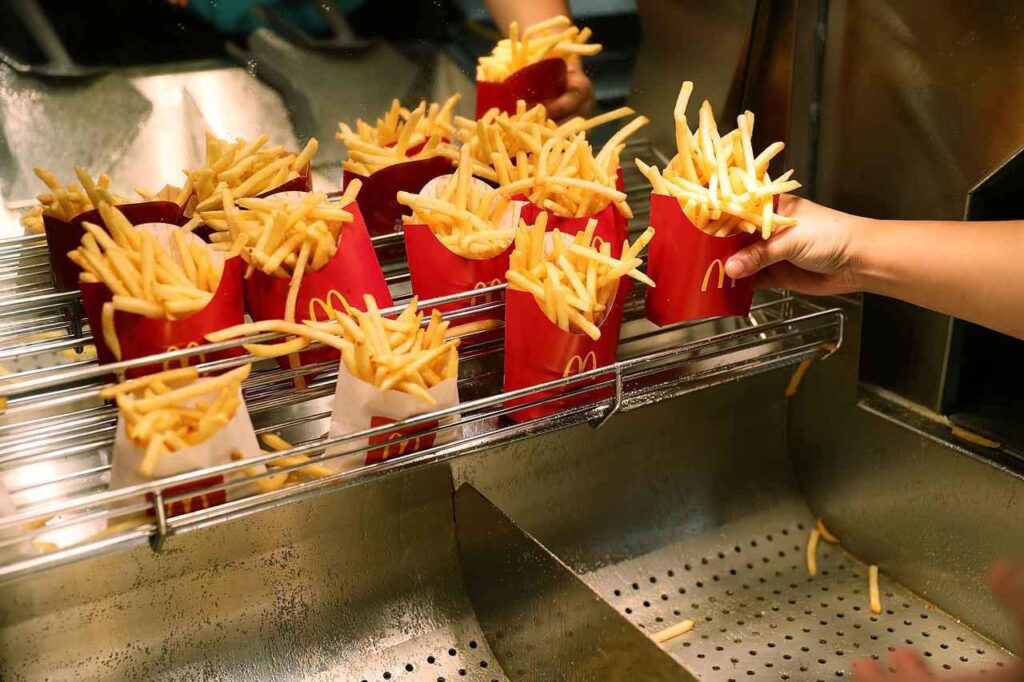 According to McDonald’s USA, the four types of fries are Russet Burbank, Russet Ranger, Umatilla Russet, and Shepody Fries. However, a previous video released by McDonald’s Canada showed the potatoes being washed, peeled, and shredded by a machine, according to Eat This, Not That. In other words, the shape of McDonald’s fries is the way they are cut in the factory.

There are many reasons why McDonald’s fries are so good.

The potatoes used by McDonald’s come as a surprise to some.

According to an investigation by NBC, the potatoes used in the fries are grown in a field owned by Bill Gates, co-founder of Microsoft and a wealthy man, in Washington State, USA.

Mr. Gates owns 269,000 acres of farmland in 18 states, which is larger than the total area of New York City, making him the largest private owner of farmland in the United States.

Although this does not directly affect the taste of McDonald’s fries, it is another surprise that is not known.

Obon and Ohigan, Enshrine the spirits of ancestors in Japan

The event of worshiping ancestors in Japan fused ancient Japanese beliefs with Buddhism. The big events that still re...

Costco, “super-standard products” that will be indispensable for the coming season may “disappear”

"Super classic products" that will be indispensable for the coming season at Costco in the United States may disappe...

How to make Japanese tea without mistake

In addition to Japanese tea, there are black tea and Chinese tea in the world, but most of them are fermented tea. Howev...

Starbucks Doubles the Quantity of Drinks at No Extra Charge

When you order a drink at Starbucks, all you have to do is ask for one thing, and your drink quantity will be double...
スポンサーリンク