In 1987, the youth music movie “SHOPLIFTERS OF THE WORLD”, which colors the summer night of five young people with the Smiths’ masterpiece, was released in December.
2021年秋冬、転職活動するあなたへコンタクトすべき外資系人材紹介会社3選
Billie Eilish laughs about the “real reason” she wore oversized clothes
Anne Hathaway looks like Audrey Hepburn!
BTS’s personal Instagram, who was the first celebrity to follow them?
円満退社に向けたあなたが注意すべき事、5項目
Hooters, “new shorts” voices from employees “like underwear” one after another → changed rules
Tom Holland’s paycheck multiplied by 40! Spider-Man 4 Could Earn $1.1 Billion
7ポイント、外資系企業の転職面接準備
THE BATMAN The Batman” to be released on March 11, 2022 New Catwoman scene photos unveiled
That popular cast is back! Summary information on the sequel to “Sex and the City”
Diva Beyonce turns 40! See the secrets of workouts practiced for a beautiful body
Also released in Japan? Ariana Grande Beauty Brand Unveils Teaser
Anya Taylor-Joy, who was selected as the “face of the year”, goes to the award ceremony in the costume of “101 dogs”
For glossy gray hair! 2 professionally recommended “white hair care shampoos”
Louis Vuitton and Nike collaborated Air Force 1, unveiled by Givenchy’s designer
Japanese who bow their heads when trying to shake hands
転職した外資系企業で地獄から脱出した、5ポイント
Neymar’s grandmother’s 400 million yen mansion is the talk of the town. ‘The best Christmas present in the universe’
How to make Japanese tea without mistake
“Tea ceremony”, a hospitality that you can experience using tea for guests
Benedict Cumberbatch in the movie The Courier: Top Secret Carrier Spies Avoid Nuclear War
Costco, if you break “that rule”, you will receive a “cowardly letter”
Costco Rotisserie Chicken’s Deliciousness Caused the “Worst Member Story Ever”.
Billie Eilish talks about how watching adult videos since the age of 11 has affected her “sex life”.
外資系企業へ転職する人へ知っておくべき５つのポイント
Good dating with DiCaprio! Camila Morrone unveils see-through dress
What is the secret to maintaining a beautiful Victoria Beckham body shape over the years?
Uber stuck in snow traffic for “9 hours”, what about the fare…!
Manchester United’s Glazer family sells 9.5 million shares with a market value of about 20.7 billion yen … Still only 8% of the holdings
Billie Eilish performs with Ai Yazawa’s “NANA” T-shirt
初めて外資系企業の経理・会計職に転職、押さえるべき5ポイント
Abandon career development, do not like changing jobs
外資系へ未経験で転職する準備には？日系企業との違い 4つのポイント
外資系企業で働いて良かった事 5選
Real Madrid transfer “certain” Mbappe to Benzema’s neighbor? To purchase a property in Madrid
ホーム
Entertainment/Beauty
Entertainment

As many of you may know, McDonald’s in the U.S. is offering a different menu item for “free” every day for 12 days from December 13 to December 24, Christmas Eve, when you purchase a $1 or more item with the McDonald’s app. Mariah’s assistants have been working on a collaboration project called Mariah Menu. 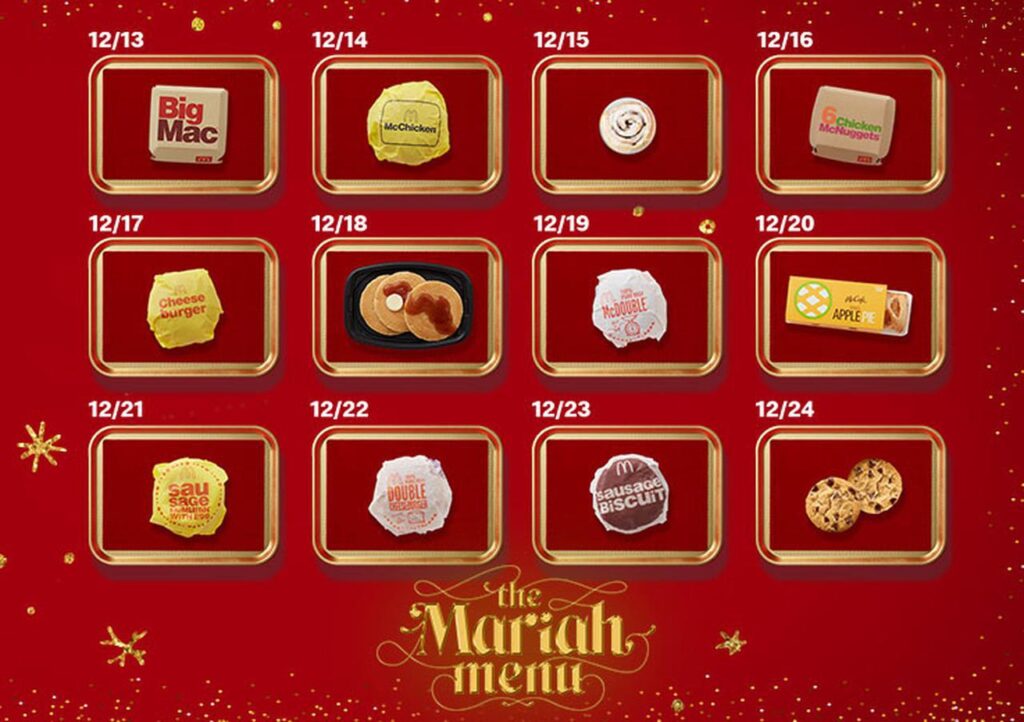 Mariah’s assistants entered the restaurant first, and while the waitresses were distracted so that the surprise would not be revealed, Mariah appeared in a gorgeous red dress. The dress was quite fancy for just going to McDonald’s, and when Mariah herself said, “I think I dressed up a little too much,” a nearby assistant said, “No, not at all. You’re Mariah,” she said.

Incidentally, when Mariah’s menu was announced, she revealed that her favorite menu item was a “cheeseburger with more pickles,” and as she had said, she ordered a cheeseburger that day as well.

The surprise ended up being a great success and Mariah said, “It was a lot of fun and it was a spur of the moment thing, but it was good. I never dreamed when I was a kid that this day would come (i.e. that McDonald’s would release my collaboration menu). Merry Christmas, everyone!” She seemed to be very happy.

The 64th Grammy Awards Ceremony to be Officially Postponed

Billie Eilish Blasts Charlie Puth for Calling him a ‘Loser’