Best friends Selena Gomez and Cara Delevingne show off their matching “tattoos”!
“Tea ceremony”, a hospitality that you can experience using tea for guests
JoJo Siwa and Naomi Osaka spotted at Lakers game with high celebrity encounter rate
Selena Gomez freaks out over the ‘size’ of her new tattoo
転職準備ができていない３つのポイント
What’s next in food trends? A major international supermarket predicts the food trends of 2022
転職した外資系企業で地獄から脱出した、5ポイント
Anne Hathaway looks like Audrey Hepburn!
Sad news: “Harry Potter” reunion show mistakes Emma Watson for Emma Roberts
THE BATMAN The Batman” to be released on March 11, 2022 New Catwoman scene photos unveiled
Bags that match Hailey and Gigi are under 10,000 yen! JWPEI’s Black Friday sale is hot
Brad Pitt’s ‘Surprising Reaction’ to Reports of His Love Life, Revealed by His ‘Rumored Partner
Lady Gaga confesses to the back of the raw meat dress over 11 years! What is the claim in the dress?
Hurry to Starbucks in Japan! Collaboration between Starbucks and Taylor Swift realized for a limited time
BTS’s V dances next to “the female singer” at Harry Styles’ concert
Selena Gomez, who gave up Instagram three years ago, what she got away from SNS
Benedict Cumberbatch in the movie The Courier: Top Secret Carrier Spies Avoid Nuclear War
Gaston’s public proposal to Belle at Disneyland→Belle’s “reply” is too biting
The Matrix Resurrects: What You Shouldn’t Expect, What You Shouldn’t Do
Brave Rihanna shows off her raw buttocks in pajamas that attract with her butt crack
Japanese who bow their heads when trying to shake hands
Brazilian national singer Marilia Mendonsa crashes to death with 39 million followers, 26-year-old diva
SAG Awards 2022 Nominations Announced! No nominations for Kristen Stewart
Grammy-winning rapper’s ‘rare dinner’ goes viral after refusing sushi served at high-end restaurant and ordering KFC
Leonardo DiCaprio Melts for His 23-Year-Old Lover! Leonardo DiCaprio and his girlfriend Camila Morrone are caught hugging each other in the sea.
Adele’s favorite eyeliner is a huge hit! Also available in Japan
Hailey Bieber puts in a tattoo full of “local love”
Exclusive distribution on Star Channel EX on November 24, the drama “Vigil Underwater Conspiracy” with the highest BBC audience rating [Teaser video]
転職活動がうまくいかない5原因とその対策
突然、外資系企業への転職活動中に英語での面接と言われたら、押さえる5ポイント
会社にバレずに転職活動する時、気を付けたい4ポイント
Don’t miss the airport version of the popular anime! Very satisfied with goods and gourmet “Narita Anime Deck” latest guide
Messi’s wife reveals family photo from Ballon d’Or award ceremony… Messi wears golden dress that emphasizes his chest, and his children wear the same dress as their father
Hero selection criteria revealed by the president of Marvel Studios “Shang Chi” What about Simu Liu?
Hooters, “new shorts” voices from employees “like underwear” one after another → changed rules
BTS’s personal Instagram, who was the first celebrity to follow them?
ホーム
Habits / Food

A glimpse of the “house of the other party” at online meetings such as Zoom and Teams. I’m curious about the sense of the interior …? 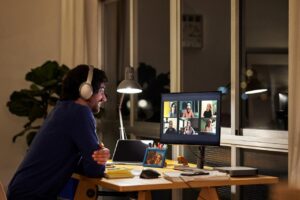 Oliver Space, which rents and sells furniture in the United States, conducted various surveys on remote work together with marketing research company OnePoll.

In 2020, a pandemic of the new coronavirus will hit the world, and the way of working will change drastically. Many companies have introduced telecommuting to avoid going to work as an infection control measure.

And among them, online meetings were often held. Various apps such as Zoom and Microsoft’s Teams are used, and in some countries government meetings and trials are held online and videos are released.

In this survey of 2,004 people living in the United States, 54% of respondents said they would judge the interior or interior of a room with a colleague at an online meeting.

And that harsh eye seems to come back to me. As many as 64% decided to improve their room because they were worried that their space would be judged.

However, the background can be changed in many online meetings. As a result, various organizations have released virtual backgrounds, which attracted a lot of attention in 2020 when fashion brand Tommy Hilfiger released 12 different backgrounds for free.

McDonald’s, the clerk revealed how he “prepares” his burgers, and it’s a total mess!

A popular “harvest garden” in the Netherlands where vaccination is progressing. Enjoy leisurely on the farmland in the suburbs.