Meghan’s “prank” was noisy, and she suddenly started singing with her cat ears.
Obon and Ohigan, Enshrine the spirits of ancestors in Japan
Japan’s “Too Sexy Ronald McDonald,” which shook the world, became a topic of conversation overseas again with a certain “trigger.
Anya Taylor-Joy, who was selected as the “face of the year”, goes to the award ceremony in the costume of “101 dogs”
Kissmark on the neck, Kim Kardashian and Pete Davidson on a hand-held date
Adele’s new release coming soon? “30” billboards appear in Tokyo all over the world
“He’s the one who’s impatient” Adele, Ed Sheeran and don’t mind the release time
“Spirited Away” & “Dragon Ball”, Japanese anime costumes selected by celebrities
The US Football Federation presents the same contract to the men’s and women’s national teams. Will unification of salary systems eliminate gender inequality?
Very short summer vacation for Japanese businessmen
Remake of the movie “THE GUILTY” starring Jake Gyllenhaal, unpredictable suspense
新卒で経験した外資系企業習慣
“Santa Claus’s love” drawn in a commercial for a post office 50 years after Norway recognized homosexuality
Tateyama Kurobe Alpine Route Complete Guide! Summary of essential reading knowledge of Snow Corridor
A total of about 800 million yen! Ariana Grande Offers “Free Therapy”
Culture of eating raw food in Japan
Daniel Craig, the sixth James Bond, wears all black in New York City.
Messi’s wife reveals family photo from Ballon d’Or award ceremony… Messi wears golden dress that emphasizes his chest, and his children wear the same dress as their father
2022年 外資系企業やエグゼクティブ職の転職時にコンタクトすべき外資系人材紹介会社 5選
McDonald’s, the theory that if you say “this word” when asking for potatoes, you will get “freshly fried”
初めて外資系企業の経理・会計職に転職、押さえるべき5ポイント
Kentucky Fried Chicken, “Left Food” Causes Horror
Leonardo DiCaprio Melts for His 23-Year-Old Lover! Leonardo DiCaprio and his girlfriend Camila Morrone are caught hugging each other in the sea.
Kentucky Fried Chicken’s “sloppy eating” is the best way to eat!
7ポイント、外資系企業の転職面接準備
McDonald’s notices “cheese problem” about Double Big Mac
What is the secret to maintaining a beautiful Victoria Beckham body shape over the years?
Uber stuck in snow traffic for “9 hours”, what about the fare…!
“The reason why the role of Trinity in” The Matrix “did not contact the co-stars” is heart-warming
Costco Members’ Choice of Products to Pay Off the Annual Fee!
Cristiano Ronaldo reportedly selling himself to Barca
Japanese judo players who think they will lose except for the gold medal at the Olympics
Bags that match Hailey and Gigi are under 10,000 yen! JWPEI’s Black Friday sale is hot
“Tea ceremony”, a hospitality that you can experience using tea for guests
BTS’s V dances next to “the female singer” at Harry Styles’ concert
McDonald’s finds an “easy and reliable way” to get freshly fried potatoes
ホーム
Entertainment/Beauty

If you think Meghan suddenly squats in a public place, you can put a crystal on your head, drink milk in a baby bottle, put on a cat ear alice band and start singing as much as you want !?

Princess Megan, who left the British royal family in March 2020 and moved to the United States with her husband Prince Henry, is a popular talk show “The Ellen DeGeneres” as part of the promotion activities of her picture book “The Bench”. He made a surprise appearance in the United States and talked about the growth of his eldest son Archie and his eldest daughter Lillibet, who was just born in June this year, and the secret story of an unknown date before the relationship with Prince Henry became public. 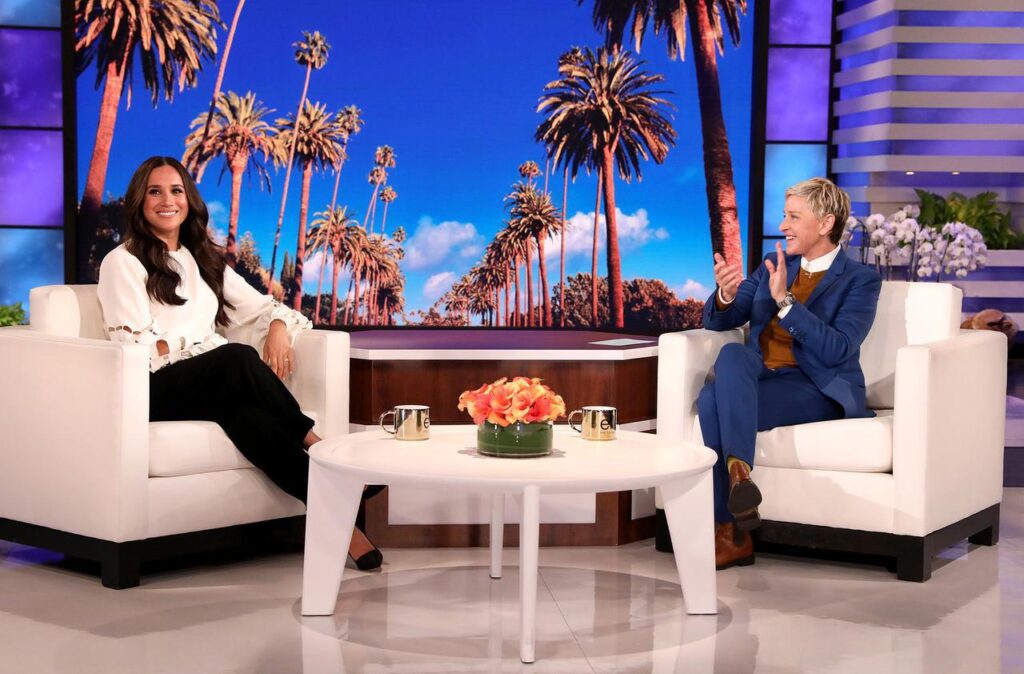 Even though she has retired from public affairs and other activities, Meghan, who is still a member of the royal family, seems to be pros and cons to appear on such a talk show, but in fact it has more ripples. It also appeared in a corner that seemed to expand.

In The Ellen DeGeneres, there is a stunning corner where guests can be “played” mainly in front of the general public at the direction of the moderator Ellen DeGeneres, and so far singer Harry Styles and actor Emma Watson. Many popular celebrities such as Watson have become their prey.

This time, Princess Megan also appeared in this stunning corner. When I came to the flea market on the premises of the studio where the studio of “The Ellen DeGeneres” was located, I suddenly followed Ellen’s instructions and squat on the spot.

In addition, while walking around the shop, he said “I have healing power”, “Do you feel my power?” And put a crystal on his head, drink milk in a baby bottle, and squirrel. He ate cookies steadily in such a way as to eat, sang fake nursery rhymes with cat ears, and repeated rare behaviors.

The people in the shop couldn’t be rude, so they responded amiably, but their faces were completely drawn. At the end, Ellen appeared and made a mess, so I finally understood what was happening and everyone smiled. Perhaps Meghan was relieved, she hugged Ellen as she collapsed, saying “Oh my god.”

Real Madrid to withdraw from Harland battle: ‘We have no intention of participating in the auction,’ say local reports